I was tired of the Flickr badge breaking validation on my site, so I got rid of it. In it’s place, I’ve installed a WordPress plugin to do the job. Say hello to FAlbum! Not only does it display a random selection of my photos, when you click on the thumbnail it displays the larger version of the photo right within my site. Try it out and see what you think.

Unfortunately, the photo display pages aren’t quite compatible with the theme I’m using. I need to do some tweaking with the stylesheets to get everything displaying properly, but it’s a start.

The cool thing about having a blog is if you break it, you can leave it for a few days and you don’t have to worry about your boss breathing down your neck to get it fixed.

Oh, and I almost forgot to mention: if you scroll down, way down, you’ll see links to CD Baby for both of Jay Dunphy’s albums, as well as links to find them on iTunes. Go buy one (or three), and help us make another one! 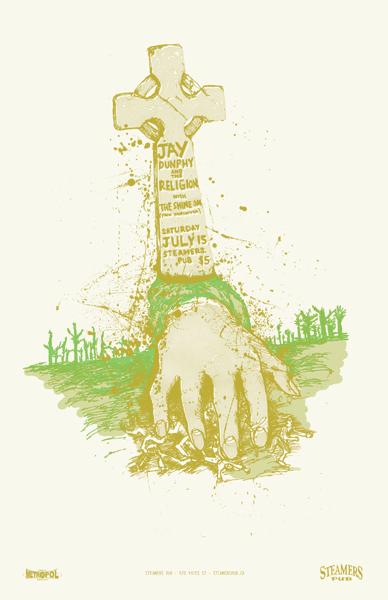 Jay Dunphy and the Religion is playing with The Shine On from Vancouver this Saturday at Steamers. Doors at 9 pm, cover is $5. Great poster by Brandon of Metropol.

I’ve never been able to draw to save my life. I can’t complain too much, I’ve got other talents, but yesterday I had a great idea for a cartoon, Ã  la The Far Side. Perhaps someone else can do something with this.

Scene: Two Native Americans, a man and a woman, stand in front of their teepee. The man holds a blanket over a fire, making smoke signals. The woman has her arms crossed and looks unimpressed.

Man: I’m sorry honey, I have to take this…

Any idea-starved cartoonists out there?

Here’s an expression that needs to die: “It’s the greatest thing since sliced bread!” I can think of a million inventions that are better than sliced bread. Say, for example, toilet paper. Whatever people were doing before toilet paper was invented, I can pretty much guarantee it was worse than slicing bread.

If you haven’t checked out the new Neko Case album, Fox Confessor Brings the Flood, I highly recommend you do so. This is her fourth solo studio album, though you may also know her from her work with The New Pornographers. I picked this up on the recommendation of an email from Amazon.ca, despite not having heard any of her previous albums. This album has an alluring combination of lush instrumentation, cryptic yet emotive lyrics, and finely crafted songs. And Case’s amazing voice soars over it all like… uh, something that soars. Whatever, I can’t write reviews. Just buy the damn album, it’s really good. Here’s an MP3.

Well, I promised a final update about the tour, but I don’t really have much else to say. We made it there and back, the van never broke down, nothing got stolen, only one show got cancelled (and even then it wasn’t really cancelled). Parts of the tour were somewhat trying, but I guess that’s to be expected when you’re stuck in a van with three other people for 8 or 10 hours every day. Would I do it again? Maybe.

I’ve uploaded the rest of the pictures.

Oh, and if you’re in the Victoria area on May 5, come down to Steamers to see the first band that Ron the furnace repair assistant from Spanish, Ontario has ever met.

Well, it’s done. We played our final show last night in Vancouver. Today Josh, Allan, Jay and I returned to Victoria, and to our “normal” lives. The tour had its ups and downs, to be sure, but on the whole it was a success. I’d like to write more about it, but I’m pretty much exhausted. Maybe in a few days.

We made it! The hours of driving have paid off, we are in the T-dot, aka TO, aka Toronto.Â We arrived at the house of Mr. Orynoman at around 3 p.m.Â Josh, Allan and I said a quick hello to Greg (and his dog) andÂ wandered off in search of an Internet cafe.

The Winnipeg gig went well. It wasn’t really the right venue for our kind of show, but we rocked their socks off regardless. We had another lovely stay in a Super 8 motel and hit the road early the next morning for Thunder Bay.

Ah yes, Thunder Bay. Josh’s catch phrase for every city we arrive in has been, “This place sucks”, and it certainly applied there. When Allan and Jay arrived at the venue, there was already a band setting up on the stage. Apparently they are the house band that plays every Thursday night, and the manager had no idea we were supposed to be performing. After initally resigning ourselves to not playing, the bar offered to let us play a short set, which we did. We got a free meal and a cut of the door, and a cheap motel room,Â so we made out all right.

A somewhat inebriated bar patron informed me that Thunder Bay has the highest beer consumption per capita in all of Canada. Congratulations guys, you did it!* I also met an interesting gent named Aaron. He likes to sing Elvis songs andÂ get really drunk. He is also very lonely. He wants you to know that he is not gay, however.

Thunder Bay certainly has it’s charms, but Toronto beckoned, so we set off early the next morning. Shortly after hitting the road, we received a gentle correction of our somewhat liberal interpretation of the speed limit by one of Ontario’s finest. You down with OPP? Yeah, you know me. We made it as far as Spanish, Ontario before a heavy fog set in, so we elected to spend the night in a motor inn there. Allan and I enjoyed a few beveragesÂ in the adjacent lounge. We also met one of the locals. Rob is a furnace repair assistant who enjoys fishing. Happy birthday, Rob.

This paying by the minute for computer access is crap. Next time, I’m totally bringing a laptop and sponging off of open wi-fi access points.

* This is an in-joke that only my fellow bandmates will appreciate. The rest of you may disregard it.

Hello Winnipeg! I come to you today from an internet cafe on Osborne St. The drive in was interesting, with large pools of water along the sides of the highway. I guess they’re due to the flooding of the river. I can now say I’ve driven through Portage and Main,Â the most famous intersection in Canada.

Last night’s gig at Lydia’s was great fun. Free dinner, a room for the night, and a few bucks didn’t hurt either. Tonight we play at the Freehouse, which is an Olive Garden-esque restaurant. Strange, I know, but the event isÂ in factÂ called “Why Not Wednesdays”, so there you go. We may have to strip down our set a little to cater to the atmosphere of the place. Or we could just rock their socks off. We shall see…

We’re in Regina. We’re staying in the basement of a talented singer-songwriter named Carolyn. So far we’ve only had to stay in a hotel once.

We went to see Cuff The Duke last night at the venue next door to where we will be playing tonight. They were excellent, as usual. This is the third time I’ve seen them, having caught them in Victoria opening for The Sadies and Sloan, respectively. We also played at the Tongue and Groove in Lethbridge the night before they played there. Either we’re following them around, or they’re following us around, I’m not sure.
Funny story: Between songs, frontman Wayne Petti told a story about their show in Canmore. After their show, he had ended up drinking Pilsner with someone who told him how the letters in Pilsner correspond with features on the label. (P is for plane, I is for Indian, etc.) I didn’t get a chance to talk to him after the show, but I’m pretty sure he met Mike Little.

The shows in St. Albert were great. We stayed with a wonderful guy named Carmen, who had also set up the shows for us. The first night, three of us stayed up until 3am listening to records; the next night, we were up late jamming in their garage.

Next stops: back to Saskatoon, then Winnipeg, then the long drive to Thunder Bay…