Both of the bands I’m in are performing on Saturday, Feb. 10 at Steamers Pub. Jay Dunphy and the Religion and Annie Nolan are playing with The Vacant Lot. Show starts at 10pm.

In other news, I’m doing a presentation at work tomorrow for a bunch of important people. Wish me luck.

Annie and Jay are playing a solo acoustic show at the Solstice Café on Friday. Here’s the poster I did up for the show. 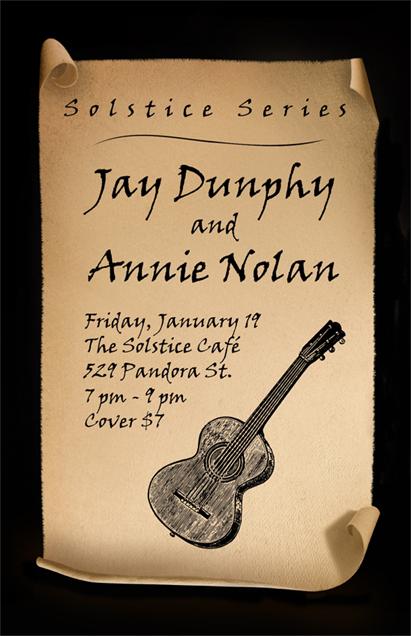 I played the cello when I was young, starting when I was five up until I was 13. In addition to lessons and recitals, I also performed in a string orchestra. As I imagine is the case for many youth string orchestras, Pachelbel’s Canon in D was a staple of our repertoire. Accordingly, this standup routine by comedian Rob Paravonian hit close to home.

I must admit, however, to having fond memories of running home after getting off the school bus, picking up my cello, and playing along with Pachelbel’s Canon on the radio. It was the closing music for one particular program on CBC Radio (which a quick Google search reveals to be Off the Record, hosted by Bob Kerr), and the timing of my arrival generally allowed me about 15 seconds of accompaniment. 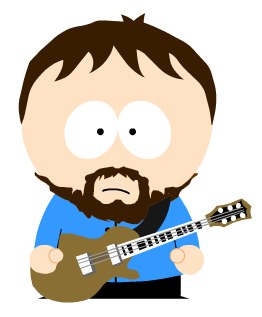 Create your own at sp-studio.de.

Dear Guy Who Thinks His Username On YouTube is Tweek:

Your username is not Tweek. My username is Tweek. Please stop clicking on the “forgot my password” link and typing in my username. I don’t need an email reminding me of what my password is, I already know it.

And YouTube, you’re not blameless in all of this. Why not follow the lead of sites like Flickr, Myspace, and pretty much every other site out there and require a user to enter the email address he signed up with to get his password reminder?

I am breaking my blog silence to tell you I just saw Islands perform at Legends, and my face hurts from smiling, they were that damn good. It was one of those shows that reminds me why I want to make music.

This is to be the month of concerts for me. Coming up:

I was trying to watch the Talladega Nights trailer on the Apple Trailers site. It wasn’t working for some reason, so I figured I’d open up the HTML source to get the direct link to the video. In doing so, I found this amusing comment in the HTML:

<!-- NOTE: Please ensure this is right-aligned. Object must not cover Will Farrell's face. -->

Flickr has just added a new Map feature to their awesome photo-sharing application.

So now I’ve gotta go and geotag all my photos. As if I didn’t have enough things to do 🙂

You may have noticed the theme has changed… I’m experimenting with the K2 template for WordPress. Let me know if I’ve broken anything.

For some time, I’ve been peripherally aware of an individual by the name of Ze Frank and his video podcast, “the show“. Having now watched a few episodes, I’m pretty much hooked. It’s “The Daily Show” meets “Monty Python’s Flying Circus” meets “Max Hedroom”. Ze’s sarcastic, fast-talking, no-rules riffing is by turns hilarious and insightful.

The show has a great user-created component as well, where viewers (aka Sports Racers) are encouraged to comment on the show, transcribe episodes, write their own segments for Ze to perform on so-called “Fabuloso Fridays”, and identify themselves on a map in a section of the site known only as THE ORG.

Go watch the latest episode, check out the wiki and stick a pin in the map. You’ll be glad Ze’s thinking so you don’t have to. What’s your Power Move?